How can the RSS and its affiliates establish markers of Hindu religious identity, and promote re-conversion, when they are not in consonance with the understanding held by a majority of people from their own faith?

The concept of belonging to a 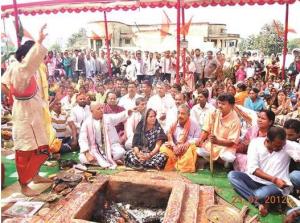 particular religion or identity in a diverse country like ours has been a contentious issue. However, whether the contemporary tussle over re-conversion is an issue of identity or for adding numbers in the name of religion is not very clear. The issue is not very important for an individual following a particular religious belief but it is a serious matter for those involved in organising conversions. If religious conversion or re-conversion is for the sake of protecting its ‘identity’ then a question arises. Whose identity are we referring to?

If the RSS or Yogi Adityanath decide upon Hindu religious identity, by promoting conversion into their
fold, then one has to follow their understanding of Hinduism. However, their version of Hindusim is certainly not in consonance with the majority and their understanding of Vedas. Even Muslims have not focused on the real issues constituting the Islamic identity. They have largely focused on a Muslim’s identity with their outfits and the conventional beard and its length and the way ladies should dress without getting their hair cut. The best way to reflect Islamic identity is to place primary emphasis on the individual’s good conduct (akhlaq), obligations towards education and taking care of the have-nots. All these diktats directly flow from the Holy Quran.

On the legal side of religious conversion, undoubtedly, it is a right of a citizen with or without ‘propagation’. In the constituent assembly debates, Dr TT Krishnamachari had stated that an ‘individual’s right to convert to a new religion was absolute, and the right to propagate his chosen religion to another was subject to safeguard of law and order’. How should we limit the ability to ‘propagate’ and ‘not create disorder and undue conflict in the mind of the people’. KM Munshi’s view on the matter during the constituent assembly deabtes was that the word ‘propagate’ was not added because Christians wanted to convert people aggressively, but the word ‘propagate’ was a fundamental part of their religion and even if the word were not there, freedom of speech was good enough to guarantee that  right.

I can also understand the definition of ‘propagation’ through a London based novelist, Elif Shafak, who says that there are more fake Guru’s and false teachers in this world than the number of stars visible. A genuine guru will not direct your attention to himself and perfect obedience but will help you to appreciate and admire one’s own inner self. The said admiration to focus on one’s inner self can be a perfect example of propagation.

The Fundamental Rights in our constitution regulates different aspects of our life, including freedom of speech and expression, practise any profession, free movement and manage religious affairs. All are subject to reasonable restriction in the larger public interest. Similarly Article 25 is already subject to restrictions. Since this government has come into power, they have spoken for de-regulation of various restrictions, repealing laws, which according to the government are no longer needed. Why  to see Article 25 with different view and bring in a separate legislation? The motivated mischief is evident.

The regulatory provisions, if formulated by a legislative enactment and the responsibility to implement them would lie with the local police. Irrespective of who has been in power,  the police has behaved according to the needs of the establishment,  while discharging their duties on these issues. The reports on the conduct of police in communal clashes and even otherwise are well reflected in the reports of various commissions. The idea of introducing legislation is an example of excessive enlargement of governmental interference in an undemocratic way, which will only create larger public disorder rather than maintaining order.

Muslims or Christians certainly should not be troubled about their co-believers getting converted to Hinduism as the Constitution of India guarantees them to do so. Similarly, Hindus should also not be bothered. The matter of concern for all, Christians, Muslims and Hindus should be confined to the only issues if convertees are lured with governmental benefits, which they are otherwise are entitled to as citizens or if there is threat of depriving them of their freedom and legal rights as guaranteed by law.

This article appeared in the Print Edition of the Millennium Post on 07th January, 2015
LINK