Few weeks before, a nine-judges’ 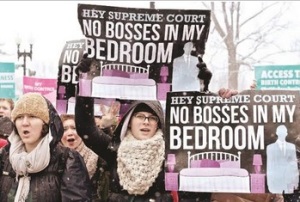 bench of the Supreme Court of the United States took a view on the issue as to whether a for-profit business corporation can take the plea of violation of religious freedom and belief for not complying with the contraceptive mandate coverage for women under the medical insurance flowing from the Patient Protection and Affordable Care Act of 2010.  As per the Act, the Department of Health and Human Services (HHS) had issued regulation directing profit making corporations to make arrangement of health insurance which would also cover contraceptives for women.

In case of not following the same, the corporations had to pay huge penalty. At the same time, the regulation provided for exemptions from the said condition to religious non-profit corporations.
For-profit corporations, like Hobby Lobby Stores and Contegosa, took the plea that they were required to run their business in accordance with their religious relief and moral principles since they wanted to ‘operate in professional environment founded upon the highest ethical, moral and Christians’ principles and further needed to ensure reasonable profit in a manner that reflects Christian heritage.

They also took the plea that as per their belief, human life begins at conception and therefore it was against their moral conviction to be involved in the termination of human life after conception and it was a sin against God to which they are held accountable. Hence, as they pleaded, the imposition of insurance coverage with the contraceptive shall be against their religious freedom protected under the Religious Freedom and Restoration Act of 1993 (RFRA).

It is not for the first time when the issue of religious freedom in conflict with business interest was being agitated before the Supreme Court of US.  But here, there were two major differences from the earlier cases. Firstly, earlier cases had come prior to RFRA and secondly for the first time a for-profit corporation sought religious exemption from generally applicable laws. In earlier Sherbert’s case, the Supreme Court had taken a view that an employee who was fired for refusing to work on her Sabbath could not be denied unemployment benefits.

In an another earlier Yoders case, the Supreme Court took a view that Amish children could not be required to comply with the state law demanding that they should remain in school until the age of 16 even though there religion required them to focus on uniquely Amish values and beliefs during their formative adolescent years. Later the Supreme Court rejected the balancing test set forth in Sherbert and accordingly the US Congress enacted RFRA which provided that the ‘government shall not substantially burden a person’s exercise of religion’ even if the burden results from a rule of general applicability.

As per the RFRA, if the government substantially burdens the persons’ exercise of religion then the government is required to demonstrate that the action of burden on exercise of religion is in furtherance of compelling governmental interests and least restrictive means of furthering that compelling governmental interests. This being the broad background of legal position, the Supreme Court was called upon by Hobby Lobby to take a view on the validity of contraceptive mandate in the insurance coverage.

Hobby Lobby was heard by nine judges’ in which five of them took a majority view in favour of the ‘for-profit closely held corporations’ holding that the contraceptive mandate violated their religious freedom.  The Courts view was based upon the fact that RFRA provisions were designed to provide very broad protection for religious liberty to a ‘person’ and if the non-profit (exempted) corporation can be a ‘person’, so the for-profit corporation would be, as the text of RFRA suggest that the small business owners cannot be left to the choice of a Department’s regulation consequence of which would be burdening one but accommodating others. At the same time, the Court doubted the locus of publicly trading corporate giants’ similar claim and the benefit of RFRA, inferring that those cases would be dealt with differently.

There has been debate on the issue as to whether ‘exercise of religion’ involves only beliefs or also the performance of physical acts or not. One of the majority judges took the view that in American tradition, freedom means that all the persons have right to believe or strive to believing divine creator and for them free exercise is essential in preserving their own dignity shaped by their religious.

In US, the discrimination on the basis of pregnancy would mean discrimination on the basis of sex, leading to a serious issue touching the very constitutional foundation of a democratic country. The Minority judgment, taking the opposite view, also appears to be very strong and convincing. They also agreed that the purpose of RFRA is that ‘interests in religious freedom are protected’ but the exemptions sought by these for-profit corporations would override significant interest of their employees and would deny the legions of woman who do not hold their employer’s belief and on the contrary the religious organisation exist to foster the interest subscribing to the same belief.

One cannot forget the US Supreme Court’s decision of 1973 in Roe V Wade, where the court had held that abortion was within the personal liberty protected by due process clause and fundamental right under US Constitution. That being so, at the instance of the employer, the right of woman to have the insurance cover with contraceptives would certainly act to the disadvantage to the woman employee at large.

Whatever the case may be, after the majority view of the US Supreme Court, the matter of religious faith has entered into the generally applicable regulatory provisions made for social security and welfare of the employees’, consequence of which would be, in future, various other issues of religious belief would reach the Supreme Court quite frequently.