The election manifesto should be an enforceable social contract between political parties and citizens.

The political manifesto or its idea thereof 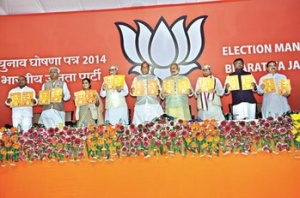 has a long history. As early as 1848, the Communists released their manifesto; in 1850, the Anarchists, believing in a stateless society, released their manifesto. Then it was the Fascists who issued the Manifesto of 1919, propagating the right for women to cast votes, proportional representation on the basis of religion, minimum wages, etc. as pertinent social issues.

In our democratic system, political parties celebrate with great vigour, while issuing pre-election manifestos. If they lose, no one speaks of the manifesto.  However, if they win and come to power, isn’t the electorate justified to see that the manifesto is implemented by the incoming government? If one does want the party in power to implement the promises laid out in their manifesto, the question of the correct forum and channel for the ensuring implementation arises. Should they repose their faith in the political system or take the legal path? The issue has been considered by the courts. The political class, who make such promises, however, have not made efforts to take them forward.

Considering the issue, as to whether promising to distribute certain articles, if a political party wins, would amount to a corrupt practice, the Supreme Court (in 2013) held that it amounted to influencing the mind of people but refused to interfere and directed the Election Commission of India to come up with guidelines for the same. The Commission came up with guidelines stating that the  voter’s trust should only be sought on promises, which can be fulfilled. Earlier, the Delhi High Court (1995) had taken a view that an election manifesto, howsoever boldly and widely promulgated and publicised, can never constitute promissory estoppels or become the foundation of legitimate political and governance-related expectations.

Every citizen, in a representative democracy, has a legitimate expectation from the government. On various occasions, despite the unclear legal position, citizens of the country have approached the Higher Courts and have enforced various undefined privileges as a matter of right, including the elements as set-out in the Directive Principles of States Policy in the Constitution of India. Many a time on the political front, citizens have peacefully protested and have been able to influence public policy. Here, political parties make their public declarations, either orally or in writing, to form the government and if they succeed, their future public policy should also be guided by their pre-declaration, i.e. their election manifesto. Such public declarations certainly influence the decision making process of the voter. The moment this public declaration is made, a majority of citizens vote them to power, i.e. a position from where they can actually implement their public declaration. Why can’t this be understood as the foundation of legitimate expectations? By electing them, one should understand that the general will of the country has opted to make the manifesto as the governing principle and that has to be understood as an implied or tacit contract between the elected and the citizens of the country.

Thomas Hobbes, a political philosopher of 17th century, described humans to be naturally self interested, yet they were rational and would chose to submit to the authority of a sovereign in order to be able to live in a civil society. As per the concept, men constructed a social contract which would afford them a peaceful life in place of uncertainty that existed in the State of Nature, where human beings constantly sought to destroy each other in an incessant pursuit for power. Thereafter, John Locke, another thinker, partly disagreeing with Hobbes, stated that the State of Nature-the natural condition of mankind- allowed individuals complete liberty to regulate their own lives in ways that best suited them. Then Rousseau came up with the concept of normative social contract. A normative social contract in India’s case is the Constitution of India. This Constitution has given power to political parties to come forward; make public declarations in advance to persuade the citizens to favour them by exercising one of their most valuable rights, i.e. the right to vote.

As a representative case, say that a political party makes a public declaration promising to address under-nutrition or malnutrition. Then once it is elected it will have to facilitate rural-employment along with continuing or enhancing the subsidy on food grains for the poor. Similarly if the promise is made to make higher education available to the last man in the line, then once elected the party would have to increase budgetary allocations for higher education. Nobody would deny that a vast majority of voters gets easily influenced with such attractive promises. Most of these voters belong to impoverished backgrounds with low literacy levels and can be easily misled through unrealistic promises and bribes. When the same voters realise that promises have not been fulfilled, they feel betrayed. Nobody would deny that there would be certain exceptions to this proposition, like in foreign policy, unprecedented issues relating to internal security etc., which are traditionally not the focal point of election manifestos.

The obvious consequences of non-fulfillment of public declarations is that the incumbent government is booted out whenever the next elections come around. Is that sufficient? An individual has wasted five years with one party,  hoping that things would change. Subsequently another political party comes around promising the moon and the merry go-around of hope and dashed expectations begins for five years with another political party. The offers in a manifesto can be seen as a sort of political bargain in lieu of votes. Therefore it is imperative that there has to be a mechanism to enforce promises, failing which, the Election Commission needs to be granted the power to take action against the political party which has failed to fulfill a majority of its promises.

This article appeared in the Print Edition of the Millennium Post on 09th April, 2015
LINK