The Triple Talaq issue arose out of a suo moto reference of the Supreme Court made in the year 2016.  In August 2017, the issue was settled by a five judges’ judgement, declaring that three pronouncements of Talaq in one sitting by a husband is a non-legal action. The government has since then been trying to add criminal consequences to this decidedly non-legal action. A Bill to that effect was passed in the Lok Sabha in 2017.

The most contentious issue is whether pronouncing Triple Talaq, which according to the Bill itself was a void action, could be termed as a cognizable and non-bailable offence? The proponents of Islamic Personal Law raised serious objections about the provisions in the Bill while the government called it a historic step. The Bill is now pending debate in the Rajya Sabha where some of the members have proposed amendments to the Bill.

Before moving on to the proposed amendments, it is important to understand that the utterance of Triple Talaq, is a ‘void’ and non-est action as per SC judgement as well as the pending Bill. However, according to 2017 Bill, it is also a ‘cognizable and non-bailable offence’, thus criminalizing something that never happened in the eyes of law. Now, the Government wants to add three clauses in it to replace an earlier provision in the Bill. The pronouncement remains a cognizable offence and hence police shall be duty bound to take action on the complaint of wife upon whom Triple Talaq is pronounced or on the complaint of ‘any person related to her by blood or marriage’. It does not define as to who all would fall within the ambit of ‘related persons‘ who can initiate cognizable criminal action against the husband.

The next amendment relates to compounding the crime at the ‘instance’ of the married Muslim woman on ‘such terms and conditions’ that magistrate may determine. This provision has very far reaching implications. Even if  the woman initiates for compounding of this offence, the conditions imposed by the woman shall have to be treated relevant otherwise the Magistrate shall not be able to determine because the woman shall either not initiate such action or she may even withdraw her pending request.

The third amendment in the Bill is that if a man wants bail for committing the offence of pronouncing three times Talaq in one sitting, he shall not be granted bail till the time wife is heard by the Magistrate.

For grant of bail to accused, even in murder cases or other serious criminal cases, there is no requirement that the victim shall be heard. Interestingly, in cases where pronouncement is inconsequential i.e. non-est, the government feels that the victim must be heard. This condition would certainly make sure that the man remains in jail for a longer time and is released only on conditions suggested by the wife. The conditions may include anything which the wife would feel that she is in a position to extract from the husband. The husband shall not be in equal bargaining position because he is either facing under threat of custody or is already in jail.

Generally, in serious offences where the maximum punishment is more than three years, bail is granted on satisfaction of the judge that the accused shall not disappear, shall not influence witness and shall not tamper with evidence. In this proposed amendment, conditions for grant of bail shall are sought from the victim, who still would remain the wife. This type of conditional bail is otherwise not permissible in criminal law because attaching conditions would take away the basic presumption of innocence. The Supreme Court has rejected imposition of conditions for payment of money at FIR stage for releasing on bail as the contents of the FIR is merely allegation and the truth can be decided only upon conclusion of the Trial.

The larger question is, whether this pronouncement is serious enough to disturb the public order and decency or it is an act of emotional violence which husband has subjected to his wife. There are Laws in place for this act. In the worst eventuality, this act of utterance can be an act of ‘assault’ by husband on his wife without grave provocation on the part of the wife as defined in the IPC. Assault is a non-cognizable and bailable with imprisonment of three months.

In the largest democracy in the world, i.e. India, we consider that same sex relationship do not disturb decency and begging in a public place or private place as non-criminal act for which two judges of the Delhi High Court has recorded reasons stating that the State would be detaining persons who are not engaged in begging, such persons may be daily wagers and/or having family members to support. As a result of the detention of the ‘bread earner of the family, the entire family may be reduced to financial deprivation and penury’. A legislation relating to a family issue can never as drastic and lopsided as the proposed amendments to the bill are, in a welfare state. Why not apply the same principle on the issue of criminalising utterance of Triple Talaq?  Wouldn’t detainee husbands be in no different positions as many of them are also the backbones to the support system of their family.

Criminalising Triple Talaq goes much beyond the contemplated encroachment in personal law based upon their religious belief. Hence it will generate maximum reaction and that would have impact on the society at large and further about their presence as community. The recent realization that Muslims could be a great electoral bonanza for various factions contesting elections, seems to be the driving force behind this legislation, which is being put forth at a time when the Muslim population in this country is faced with more prejudice than ever before and is looking for any help from the government or any other democratic faction or stakeholder. 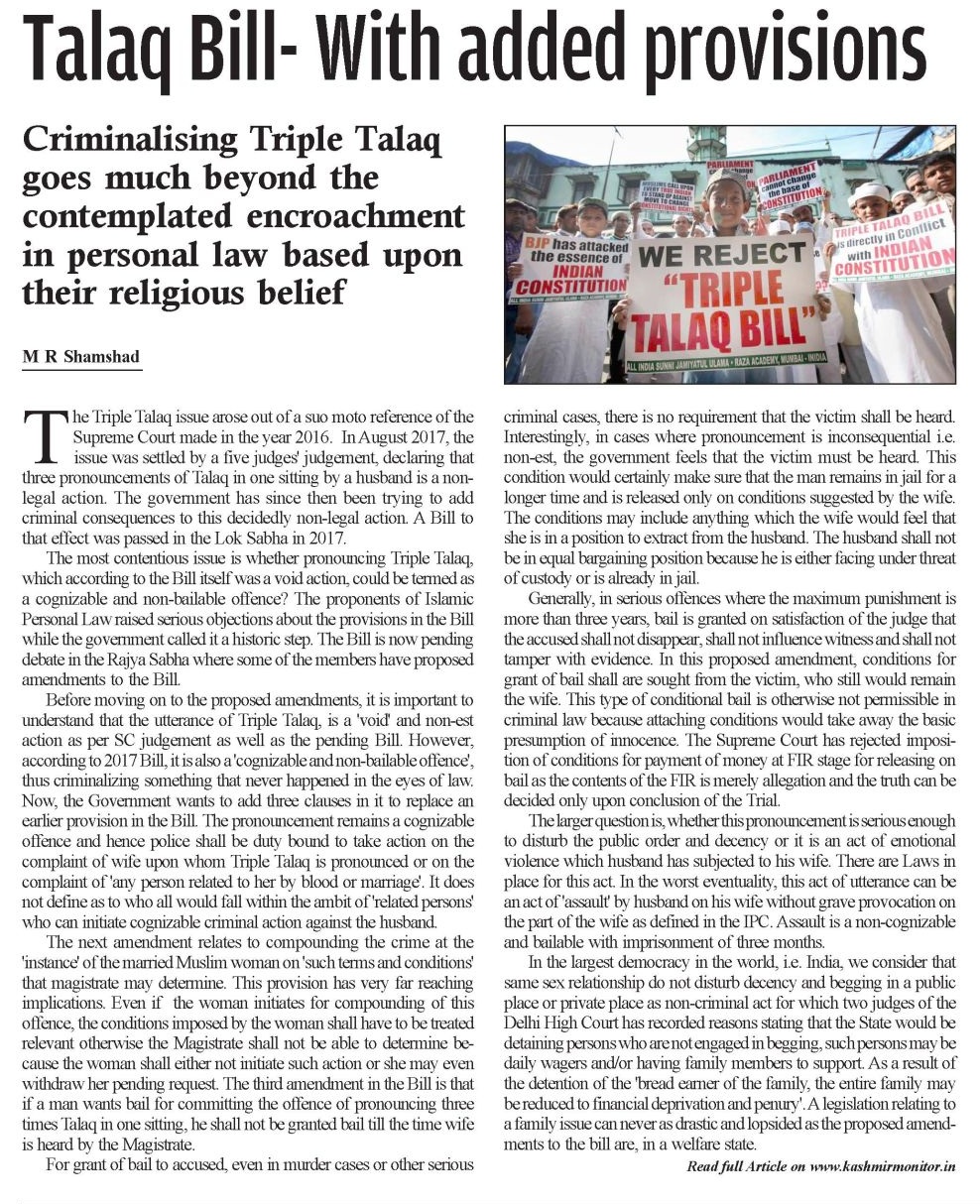 This article was published in The Kashmir Monitor on 16th August, 2018
LINK